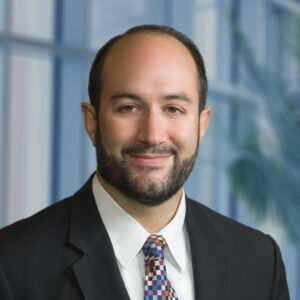 Judge J. Philip Calabrese was confirmed to serve on the U.S. District Court for the Northern District of Ohio in December 2020.  Previously, he served on the state trial court in the Cuyahoga County Court of Common Pleas.  Before taking the bench, he had a complex litigation practice for nearly two decades and was a partner at what is now Squire Patton Boggs and at Porter, Wright, Morris & Arthur, LLP, where he co-chaired the firm’s class action practice.  After graduating from Harvard Law School, Judge Calabrese began his legal career as a law clerk to Judge Alice M. Batchelder of the United States Court of Appeals for the Sixth Circuit.  He also serves as an adjunct professor at Case Western Reserve University School of Law, where he teaches an advanced course on expert evidence.